I bought a few products for my upcoming 3-day backpacking trip from Surival Pax and one of them was a much needed knife. The Mora Clipper 840, which has a carbon steel blade, is relatively cheap, and throws a great spark from a firesteel. When I got the knife, the blade had a very shiny and well polished finish. The knife is not a stainless steal blade and I know in the long run, I’ll end up neglecting this knife and it will rust. I do not want it to rust, so I decided to force a patina on it as a preventative measure. 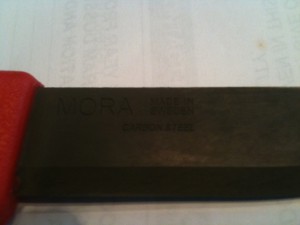 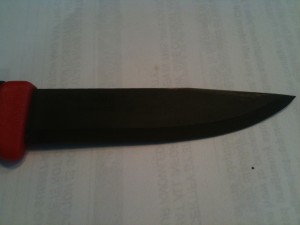 I wanted a really dark patina, a lot of people try to make a pattern or try to make the patina look natural, but I thought the blade would look much better if it was one fairly solid shade. To get this patina, I put my knife in a glass (blade down). I used a clothes pin to hold the blade up (so it wasn’t at an angle) and I filled the glass with some cheap apple cider vinegar from WalMart. About 12 hours later, I pulled the blade out and it was about 80% dark, there were some weird places that were still kind of shiny. I washed the blade off (cut my finger) and stuck it back in the vinegar. Every few hours I would check, wash the blade and stick it back in the vinegar. It took a total of about 36 hours before I was happy with the finish. I did a final, thorough wash, dried it off really good and stuck it in its sheath.

It’s the acid in the vinegar that tarnishes the knife, the tarnish will help prevent rust in the future. It’s not idiot proof, you can always still rust a knife, but it helps a lot. I’ve read a few forums that suggest multiple ways to force a patina, some people us mustard, or stick the knife in a potato. Some people soak a towel in vinegar and wrap it around the blade to make a more natural looking patina. Ultimately, mine was the easiest way to get the look I wanted and I am pretty happy with the results.