A couple of days ago one of my Facebook friends linked to an article by Adam Walker Cleaveland called, The Bible & Homosexuality: Enough with the Bible Already. I would like to respond to this article, both it’s heart and it’s content. Obviously the title is rather shocking to the more conservative folks out there. The author starts by saying, “Unfortunately, if you came to this post hoping to see a detailed exegesis of texts like Leviticus 20.13 and Romans 1.26-27, then you will be disappointed.” These text both speak about homosexuality in a negative sense.

If there is a man who lies with a male as those who lie with a woman, both of them have committed a detestable act; they shall surely be put to death. Their bloodguiltiness is upon them. – Leviticus 20:13

For this reason God gave them over to degrading passions; for their women exchanged the natural function for that which is unnatural, and in the same way also the men abandoned the natural function of the woman and burned in their desire toward one another, men with men committing indecent acts and receiving in their own persons the due penalty of their error. – Romans 1:26-27

I think it would be erroneous to state that these texts support homosexual acts. The author links to two books, one who believes the Bible does not condemn homosexuality as sin, Jesus, the Bible, and Homosexuality and one who does, The Bible and Homosexual Practice. But neither seem to be the point of this article, what is this authors real point is if you dismiss one author because of their view of scripture, then “enough with the Bible already.”

Cleaveland goes on to support his position of “enough with the Bible already.” I believe his concern is that as Christians we are using the Bible to discriminate against a whole class of people. This has been and continues to be a concern of mine. It wasn’t too long ago in American history where conservative Christians used their Bibles to condemn and discriminate against black people and  all women (even to this day). However, I think Cleaveland goes a little too far. He admits that he will be acused of going down a slippery slope, but that is merely a logical fallacy anyway. Rather, I believe he is committing his own logical fallacy, the “fallacy of slanting” or deliberately omitting, deemphasizing, or overemphasizing certain points to the exclusion of others in order to hide evidence that is important and relevant to the conclusion of the argument and that should be taken into account of in an argument. The reason I say this is because of a few key statements that Cleaveland makes, such as,

﻿﻿There are certainly plenty of books written that go into great detail concerning the very few texts in Scripture that deal with same-sex relations…. (his emphasis, not mine)

…these beliefs come from a very selective reading of a very small amount of texts from the Bible….

It seems to me that Cleaveland is demphasising these verses in favor of homosexuality. I think this is where he crosses the perverbial line. He’s right in many cases, if the Bible is causing you to believe that homosexual people are sub-human, or do not deserve the same rights as non-homosexual people, then perhaps your misreading the message of Christ. However, to claim that we should put aside our bibles if we believe homosexuality is wrong, is completely ignoring the evidence. I truly believe Cleaveland is swinging the pendelum to far… he has noticed an ongoing trend towards people (Christians) who hate Homosexuals and use the Bible to bash and condem them. His answer is to throw away the Bible, instead, I believe our answer should be to pray, seek the Lord’s wisdom, and consider these verses.

Do I think it should be illegal for homosexuals to marry? No, that is up to the state and its government. However, I do believe that homosexuality is sin. To be perfectly honest, the bible doesn’t really talk about the same topics very often. If we were to take Cleavelands view, there are tons of topics we could ignore because they are barely mentioned. For instance, Leviticus 18:23 reads, “Also you shall not have intercourse with any animal to be defiled with it, nor shall any woman stand before an animal to mate with it; it is a perversion.” But there are so few verses in the Bible about having sex with animals, why can’t we safely ignore this one? Perhaps this is a better example, Exodus 22:22 reads, “You shall not afflict any widow or orphan.” Since this isn’t talked about very often, then we can do whatever we want to widows and orphans.

Do you understand my point? I would say the bible rarely speak about the same sins over and over again, their frequency shouldn’t determine how we interpret scripture. Gossip, slander, lying, etc. are all sins but how often do you see them mentioned in scripture? Probably as much as homosexuality is mentioned. The pure weight given to each of these, clearly mark them as “sinful” even homosexuality. Cleaveland ends by saying,

If it is the Bible that is causing us to delay accepting and celebrating LGBT [lesbian, gay, bisexual, and transgender/transsexual] persons as being fully human and fully created in the image of God, just as they are, then perhaps we need to say, “Enough with the Bible already…”

What are you thoughts on this subject?

From time to time I hear about people who are “On Fire for Jesus!” Recently I heard a sermon about how we should check ourselves to see if we are the type of Christian God has called us to be. He used the example of a counterfeit bill. He said that bankers are trained to…

BT Thanks for the comment. I assume the “unpardonable sin” you are referring to comes from “Truly I say to you, all sins shall be forgiven the sons of men, and whatever blasphemies they utter; but whoever blasphemes against the Holy Spirit never has forgiveness, but is guilty of an eternal sin” – Mark 3:28-29…

This post is part of Glenn Hager’s Synchroblog. He asked people to write on the topic: Things I Learned From Church (That Didn’t Prove True And What I Am Learning Lately).In church I was taught all about “grace.” I was taught that grace is urging people into coming to church, shaming people, adding expectations to… 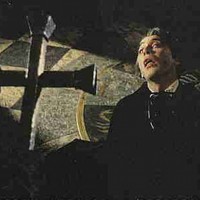 A few weeks ago Alan Knox at The Assembling of the Church wrote a post called Distractions to Worship? In it he wrote, Consider the situation where you are sitting among a group of believers, listening to someone teach. The teaching is very inspiring and challenging. You are really enjoying it. Beside you, a baby…