I’ve always had fond memories of the old claymation Rudolph the Red-Nosed Reindeer. I have let my kids watch it and they seem to really enjoy it too. It wasn’t until the second time they watched it this year that I realized something. This movie is seriously disturbing. 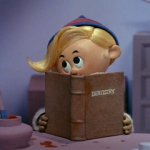 We start out by discovering that Santa’s elves are really Santa’s slaves. Hermey the Elf decides that he’s more interested in becoming a dentist, but his supervisor scolds him and tells Hermey that elves serve one purpose and one purpose only, to make toys! Congratulations parents, your kids are getting toys from a forced slave labor in the North Pole; this is worse than Foxconn! Later all the elves get together to sing Santa a nice song for him. He tells them that he barely has the time to listen to the stupid song but concedes to listening to it. When they’re finished Mrs. Claus joyfully claps and Santa simply tells them that , “it needs work”. 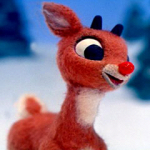 In this movie, it is revealed that Donner is actually Rudolph’s father. As Donner’s kid, Rudolph has to live up to some pretty high expectations. Rudolph’s nose starts glowing and Donner gets extremely agitated by this freakish quality in his son. Then when Santa finds out about the glowing nose, he tells Donner that Rudolph cannot qualify to pull his sleigh if he has that shining nose. Not really surprising from the slave driver, Santa… but Does Donner stand up for his son? No! Instead Donner tries to cover up the shining nose… even though it makes Rudolph uncomfortable. After all, “there are more important things than comfort — self respect!”

As Rudolph grows up being ashamed of who he really is, he starts to go to school and takes reindeer flying lessons. He’s hanging out with his peers, meets a hotty who calls him cute, of course he gets a little excited and flies around like it’s nobody’s business. Unfortunately for Rudolph, his nose concealer falls off and as the song goes:

All of the other reindeer
used to laugh and call him names.
They never let poor Rudolph
join in any reindeer games.

WAIT… that’s not what happened! In the movie, all of Rudolph’s peers start calling him names and his teacher runs up and tells them all to get back to practice their flying. That is, except for Rudolph, he’s not welcome anymore. But do not worry, Santa saw how well Rudolph was flying. He surely came to his defense after being so impressed, right? No again! Upon seeing Rudolph’s red nose (again) he tells Donner that he should be ashamed of himself! Seriously, this is the guy who brings presents to your kids?

So, Hermey the Elf and Rudolph decide that they’re going to run away because they’re sick and tired of being treated like misfits. On their adventure they meet a weirdo prospector named Yukon Cornelius. He’s cool though, except for that weird fetish where he licks snow off of his ice pick. Anyway, they all adventure together narrowly escape the Abominable Snow Monster of the North (a.k.a Bumble) and eventually they reach the Island of Misfit Toys. 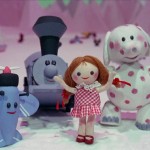 There are a lot of weird toys here, like a train with square wheels, a cowboy who rides and ostrich, and even a Charlie-in-the-box… but there is one toy that does not seem like a misfit at all. She’s a pretty little doll. What is her flaw? Could it simply be that she is a redhead? It is never explained… the only thing I found was a Wiki article saying that she had psychological issues because her owner didn’t love her. But that hardly seems to make sense, sounds like politically correct way to avoid saying, “she was a redhead”. 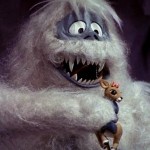 Rudolph ends up leaving the Island of Misfit Toys on his own, grows up and heads back to Santa’s slave camp. Once again, he is mocked some more for his bright nose but is also informed by Santa that his parents left to search for him (apparently his father did have a heart)… and Santa is really upset about it (because Christmas is in two days, jerk). Rudolph leaves to find them and discovers that they had been caught by Bumble, he tries to defend his family but is captured as well. The yeti is about to chomp down on some tasty reindeer meat when Hermey and Yukon come to the rescue. They end up knocking the guy out and Hermey being the dentist-wanna-be, removes all of the yeti’s nasty teeth. Fine, typical response I suppose, but Bumble isn’t out for the count yet… he charges Yukon and they both fall off the cliff, never to be seen again. Everyone is sad at the loss of Yukon but they head home to share their story.

They arrive back home, everyone hears their story and all of a sudden Yukon and Bumble come on the scene. Apparently the toothless Yeti just wanted to work as one of Santa’s many slaves. Finally, someone can put the star on their ginormous Christmas tree! Uh oh, what is this? There is a crazy blizzard out there, Santa needs to cancel Christmas because he cannot see where he’s going! Wait a minute, that freak red-nosed reindeer is back, all of a sudden Santa’s whole tune changes! While complaining about the freakish nose blinding him, he realizes that the bright nose will help him guide his sleigh! Does he apologize for the past wrongs? Nope, not at all! He merely sees a way to exploit another one of his workers. He may as well have said, “Rudolph, you and that freak nose of yours is on my sleigh team tonight… we’ll re-evaluate the terms later.”

The moral of the story? No one likes a freak… unless your freakishness comes in handy sometime in the future. So it’s probably better if you just run away now and never look back.