This post is part of a SynchroBlog with the theme, A
Christian Response to Halloween. More details at the bottom of this post.

As a child, Halloween was one of my favorite holidays. The bad part about living in Maine during Halloween was that pretty much everyone’s Halloween costume looked like this: 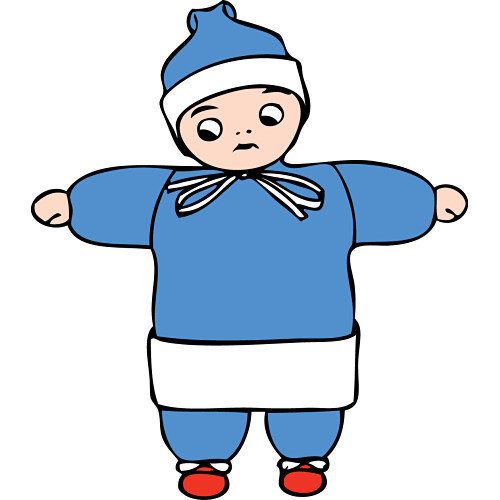 It was always way too cold out to only wear a Halloween costume. The secret trick to get around this was the heated car – jump in the car and move house to house. My Halloweens were always a little different. I did a little trick or treating, just enough to get some candy, but then my parents and I would go to my grandparents house for their Halloween party. My grandfather loved to decorate his house. Every holiday was his time to shine. During Halloween he would get somewhere up to 700 children visiting his house (he counted them). People would drive from all around to visit his house. I’m still not sure what his neighbors though about that :). I remember one year, I went to a haunted house run by the local Catholic church, it was o.k. fun, but not scary enough. Other than that deviation, it was always the same routine from what I remember.

That was pretty much what I did for Halloween as a child and before I was saved.

After I was saved I was much older and had less interest in Halloween. My grandparents were too old to do anything with their house for Halloween so I pretty much did nothing. The church I was apart of did some sort of Halloween party but I did not attend, I think I was too busy or just didn’t care. Since moving to North Carolina I can only remember what one group of Christians did for Halloween, they had some sort of Trunk or Treat thing. It was there as both a way to advertise the Church and to give children a safer place to get candy. I thought about going, but we decided to hang home and hand out candy ourselves. We got a total of zero children. More candy for me!

I have also heard of some places who run Fall Festivals instead of Halloween parties. From what I understand about Halloween, this is basically an attempt to Christianize a non-pagan holiday with pagan roots. Honestly, I have no experience with these either. I have heard hypocritical things about them.

I think I have also heard of a Reformation party in lieu of a Halloween party… but that’s not so much a cover-up as it is a coincidence (since the reformation started on Oct. 31 when Martin Luther nailed his 95-Thesis on the Wittenberg Door).

I told you all of this basically to say this. I had a lot of fun as a child dressing up for Halloween, getting all sorts of candy, going to my grandparents house and seeing all the other neat costumes. If you want to call it a Fall Festival, that’s fine, a rose by any other name smells just as sweet. If you want to provide a safe haven for the local children by doing Trunk-or-Treat, that’s great too. If you want to have a Reformation party… well frankly your a nerd ;). Just don’t get all legalistic! Here’s the thing, Halloween has no pagan significance, not to anyone with any sense. It is about being a fun little kid, imagining your are something else for the day while your parents cart you around to get you some valuable loot. Some people want to dress up like zombies, vampires, werewolves, etc. that’s fine… guess what – those things aren’t real, they are pretend. Others want to dress up as cowboys, ninjas, and police officers, that’s fine too. Maybe you want to dress up your dog like spiderman… well you’re a nerd too, but it’s still probably pretty cute. Decorate your home or not, just do whatever you are convicted of – but don’t try to make other people live by your rules.

Most of all, remember these words, “Therefore let us not judge one another anymore, but rather determine this–not to put an obstacle or a stumbling block in a brother’s way.”

The October 24th SynchroBlog includes 26 people sharing their
thoughts, their experiences, and their expertise on the subject of “A
Christian Response to Halloween” (or at least something remotely
connected to that idea.) Perhaps not all the writers are Christian,
and that is actually even cooler. Please check out these offerings
of love, and gore…uh, I mean lore.

The Christians and the Pagans Meet for Samhain at Phil Wyman’s Square No More
Our Own Private Zombie: Death and the Spirit of Fear by Lainie Petersen
Julie Clawson at One Hand Clapping
John Morehead at John Morehead’s Musings
Vampire Protection by Sonja Andrews
What’s So Bad About Halloween? at Igneous Quill
H-A-double-L-O-double-U-double-E-N Erin Word
Halloween….why all the madness? by Reba Baskett
Steve Hayes at Who stole Halloween
KW Leslie at The Evening of Kent
Hallmark Halloween by John Smulo
Mike Bursell at Mike’s Musings
Sam Norton at Elizaphanian
Removing Christendom from Halloween at On Earth as in Heaven
Vampires or Leeches: A conversation about making the Day of the Dead meaningful by David Fisher
Encountering hallow-tide creatively by Sally Coleman
Kay at Chaotic Spirit
Apples and Razorblades at Johnny Beloved
Fall Festivals and Scary Masks at The Assembling of the Church
Why Christians don’t like Zombies at Hollow Again
Peering through the negatives of mission Paul Walker
Sea Raven at Gaia Rising
Halloween: My experiences by Lew A
Timothy Victor at Tim Victor’s Musings
Making Space for Halloween by Nic Paton