This is the the U.S. Pledge of Allegiance: I pledge allegiance to the Flag of the United States of America, and to the Republic for which it stands, one Nation under God, indivisible, with liberty and justice for all.

But what does it mean to pledge your allegiance? According to the dictionary Allegiance is “the loyalty of a citizen to his or her government or of a subject to his or her sovereign.” This seems like a very awkward thing to do. There are several reasons why I believe one, especially a Christian, should not say the Pledge of Allegiance, or pledge their allegiance to a nation/group/people.

1. If you pledge your allegiance to the U.S. and the U.S. decides to kill all the Irish (just a random example). What position does that put you in? If you go against their wishes, are you going against your pledge?

Some may say that the pledge is to maintain a certain mindset and that if the U.S. goes against that mindset then you are free to take the necessary actions to correct the coarse. But isn’t that really in the eye of the beholder? Doesn’t that really make the pledge of allegiance useless? If anyone can define for themselves the circumstance to which they are pledging, then the pledge becomes meaningless.

2. As Christians we need to remember that we are not really members of this nation, we are part of the kingdom of Heaven. In fact, I have no problem with saying a pledge of allegiance, if it is pledging your allegiance to God and to His kingdom. Being a member of the Kingdom of Heaven means that we are only delegates of the nations we currently reside in.

Ultimately I think it is a bad idea to say the Pledge of Allegiance. At the very least because of its potential to put you in murky waters… and at the very most because I believe we should only pledge our allegiance to God.

What are Ordinances? It’s been a while since I’ve written a Words Not Found in Scripture post… but I still have a list of words that I want to get through. Today’s word is Ordinance. You may have heard this word from time to time while listening to a preacher or perhaps in a business…

Genesis 3:16 reads, “To the woman He said, ‘I will greatly multiply Your pain in childbirth, In pain you will bring forth children; Yet your desire will be for your husband, And he will rule over you.’” I think that are two (maybe more) implications from this verse. They are implications by conjecture but definitely… 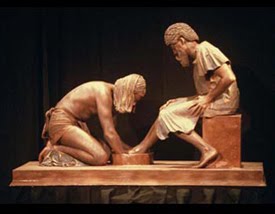 Romans 5:18 reads, “So then as through one transgression there resulted condemnation to all men, even so through one act of righteousness there resulted justification of life to all men.” Romans 10:9-10 reads, “if you confess with your mouth Jesus as Lord, and believe in your heart that God raised Him from the dead, you…

We have finished up all of the KoH parables from Matthew 13. It is time to start our journey forward and look at the latter KoH parable found in Matthew. Our first stop is Matthew 18:21-35. I found this parable very interesting, hopefully you will agree. Then Peter came and said to Him, “Lord, how…