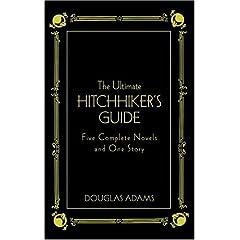 I recently had my 28th birthday. I received some money and decided to spend it at Amazon.com. I bought The Ultimate Hitchiker’s Guide (Leather Bound Edition). It looks remarkably like a Bible.

I was sitting around with some friends and family and told them of my new purchase. Joking, I said I was going to bring it to “church” with me and read it during the sermon, so I won’t be bored. Then something happened, a number of people said, “that’s what I do.”

What they meant was, they *usually* open their Bibles during the Sunday sermon and start reading. Some of them said they will read a completely different book/chapter/verse, some said they read the same book/chapter/verse but still ignore/half-listening to what the speaker is saying. To be honest, I do this regularly. Most of the time, though, I read the same book/chapter/verse, but read it in context and then wonder how in the world Joe Blow got his point from that text. Anyways, the impression I got was, that these people generally don’t get anything from the teaching part of the Sunday service, so my question is, why go?

If y’all remember, the last time I taught, during a Sunday service, I was told that I went above the heads of most people in the audience. Apparently it was frowned upon to teach the “meat”. What was funniest is that I had a number of people come up to me and tell me what a great job I did and how much they learned. One lady even showed me a full sheet of notes that she took. By the way, the majority of these people were in the same demographic that I was told wouldn’t understand what I said. I wonder, at what point did we all become stupid? Was it when we walked into the building? Or is it the fact that the teacher is just smarter than everyone else?

In a more recent conversation, a close friend of mine was explaining why she doesn’t go on Sunday mornings. Her complaint, “I just sit there and don’t learn anything new”. I agree. How many times can you be told what the Bible says? I know what the Bible says. For the most part, even when I don’t know what the Bible says, I still know what God would say about a certain topic. This same girl decided that she has better things to do with her time than sit around listening to some guy feed her milk. So she asked herself, “Why Go?” and stopped going.

As far as I can tell, the best answer to “Why Go?” is that these buildings are full of other believers on Sunday mornings. So it is the best possible place to meet other believers. The problem is, most of these meetings are sit-n-go’s. We all sit, listen, and go – fellowship only exists in hand-shakes and smiles.

Why do you go?

Challies review is broken into several sections. The first four sections are an introduction of The Shack, a summary of the The Shack, a discussion of how fact vs. fiction plays into the argument, and finally the importance of theology (read, proper theology). I am not going to delve into those sections, I am more…

A couple of days ago one of my Facebook friends linked to an article by Adam Walker Cleaveland called, The Bible & Homosexuality: Enough with the Bible Already. I would like to respond to this article, both it’s heart and it’s content. Obviously the title is rather shocking to the more conservative folks out there….

sbc IMPACT! was recently created in response to what they see as negativity coming from the SBC Outpost. In their first post they wrote that it “is the vision of a group of Southern Baptist bloggers who desire to host a truly edifying, thought-provoking, civil community for the examination and discussion of issues that affect…

Somehow we have been taught to feel holier when we are in “the house of God” and have inherited a pathological dependency upon an edifice to carry out our worship to God. At bottom, the church building has taught us badly about what church is and what it does. It is a contradiction of the…

It’s official… I am in full-time ministry… yep I said it. Believe it or not, I am here. You see, I was working part-time for Southeastern Seminary up until a few days ago. They always said it was my “ministry.” A few weeks ago my wife and I decided it was time for me to…