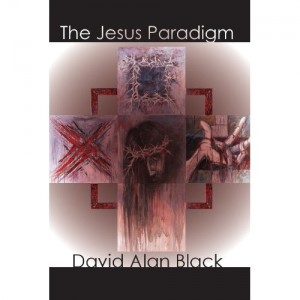 Dr. David Alan Black and his publisher (Energion Publications) was kind enough to send me an advanced copy of his new book, The Jesus Paradigm. I highly recommend this book to anyone who has started to ask themselves “Why?” when it comes to the average church-life. It is currently available at Amazon for 12.23$.

In the introductory chapter of The Jesus Paradigm (TJP) Dr. Black explains that the Church, that is to say, the Bride of Christ, has taken a wrong turn in history. The Church has prostituted itself with power, status, and wealth. American idealism but not necessarily Scriptural idealism.  Dr. Black offers a new vision for the church, a vision long forgotten, one that he calls, “The Jesus Paradigm”. The Jesus Paradigm can be simply described as “a lifestyle of sacrifice, service, and suffering for the sake of our Lord.” [14]

Dr. Black goes on to explain in the second chapter that we need to change our understanding of discipleship. The old adage “We’ve never done it that way” is purely idolatry in Black’s eyes, “the worship of tradition.” [17] Dr. Black admits that often times seminary education can have a detrimental effect on the church and its leadership.  His concern is with the over-intellectualization of some seminary teaching, specifically mentioning Eclessiology.[16] Throughout this chapter Black asks some very difficult questions about current church practices. It is interesting that the journey he takes his reader on seems to be very similar to the journey that led him to eventually write this book. Ultimately the focus of this chapter is the church’s failure to respond to the Jesus Paradigm.

In Chapter Three, Black discusses what the Anabaptists can teach us about following Christ as an example. On pages 38-39, Black lists 27 criterion that Anabaptists had for describing the life of faith. From “serving instead of ruling” to an “allegiance to Christ instead of [an] allegiance to the state.” The New Testament teaches, and the Anabaptists believed, there is no distinction between clergy and laity. “Today we find congregational participation in our gatherings squelched by an unbiblical emphasis on the ‘clergy’ and a corresponding passivity among the ‘laypeople.’ . . . the worst heresies in the Christian church have not been promulgated by laypeople but rather by professionally trained theologians.” [41, 42] Ultimately Dr. Black believes it would be beneficial for us to study the Anabaptists because their “principles can be applied to many modern problems of church life — restoring church discipline to our nominal memberships, fostering the ministry of the ‘laity,’ promoting global missions — to name a few.” [60]

Dr. Black discusses Jesus’ leadership style in the Fifth Chapter of TJP. His goal in this chapter is to “purge our thinking from unbiblical concepts of ministry.” [88] First, Black explains that the only “Senior Pastor” mentioned in Scripture is Jesus himself. Black uses three often overlooked passages to prove this point: 1 Peter 5:1-4, Philippians 1:1, and Ephesians 4:11-12.  Black believes that “biblical eldership has no room for religious titles or exalted positions like ‘senior pastor’, ‘associate pastor’, ‘reverend,’ and the like.” Black much prefers titles like “elder” or “brother”. [91-92] He concludes this chapter by offering some question that ever member should be asking about their church traditions.

In Chapter Six, Dr. Black aims to disarm the principalities and powers of politics. He pointedly says, “Christians today must maintain an ultimate commitment to Christ and eschew loyalty to a political party — any political party.” This is actually something I have come to adopt (see Christians and the Government). Dr. Black touches on many sensitive subjects in this chapter concerning Christian politics in America. He admits that his views will probably be different from most of his readers but concludes forcefully by saying, “the religious right has become bellicose, belligerent, and militaristic is difficult to deny. The tragedy is that prominent evangelicals are at least partly responsible for helping to shape America’s utopian foreign policy and worldview.” I have a hard time disagreeing with Black’s sentiments in this chapter.

I found it hard to disagree with much of what Dr. Black wrote. He was a little more upfront than most people will like, but I think the timing is appropriate. I am the first one to admit that I am the worst at following Jesus’ example… or The Jesus Paradigm. But I am thankful that Jesus forgives me for that very shortcoming and is always by my side to help me follow him down that narrow path.