You see, the word “baptize” is not actually a real English word. It is a transliterated word and like “church” was used by King James as a form of deception. When you use a word that has no meaning, you can assign any meaning you want to it. Then you require a professionally trained individual to tell you what it means. Of course, the word “baptize” for 1500 years has been twisted and distorted and even today, there are people who misuse or mistranslate it.

According to Merriam Webster, baptize means:

1 : to administer baptism to
2 a : to purify or cleanse spiritually especially by a purging experience or ordeal b : initiate
3 : to give a name to (as at baptism) : christen

1 a : a Christian sacrament marked by ritual use of water and admitting the recipient to the Christian community b : a non-Christian rite using water for ritual purification c Christian Science : purification by or submergence in Spirit
2 : an act, experience, or ordeal by which one is purified, sanctified, initiated, or named

βαπτιζω in the Greek means literally the “act of immersion or dipping”. It does not mean, “to immerse in water”. It only means “to immerse,” however, in the context of water, it would mean that you immerse in water. Similar, in the context of fire, it would mean that you immerse in fire. It can be used to describe a ship sinking, washing your hands, or even washing your dishes.

I have a pretty big problem with transliterations. Mainly because they do not mean anything to the reader. Actually, they mean a great deal to the reader. For instance, to a Catholic the transliteration of “baptize” means, “an infant who had water poured on its head to wash away its original sin so that if it dies it will spend less time in purgatory.” But baptize, literally means “immerse”. Now, this post is not about which modes of baptism are acceptable in God’s eyes, frankly, just because the word means “immersion” does not mean (to me) that people who are “sprinkled” are not real Christians. Why? Well because there is a ceremonial definition to the word Baptism. It is a symbolic act done as a proclamation of your acceptance of Jesus’ gift and acknowledgment that he has purified your soul.

I believe “immersion”, “dipping”, or “washing” are suitable translations in replacement of our current transliterations. As BDAG puts it, “the transliteration ‘baptize’ signifies the ceremonial character that NT narratives accord such cleansing, but the need of qualifying statements or contextual coloring in the documents indicates that the term ‘baptize’ was not nearly so technical as the transliteration suggests.”

As it turns out, I was talking to Alan Knox about this post and he reminded me of some research he posted on his blog about the word βαπτιζω. Here are some links to his series on Baptism:

As Alan’s research shows “we must recognize the importance of context in understanding the meaning of the verb. The verb does not always mean ‘to submerge under water’.” 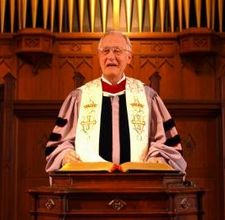 Alan Knox asked me to write a guest post for his blog, so after much deliberation, I decided to write about “Weekend Christians” and how it seems like we encourage people to belief one day is more important than another, yet we expect them to act the same on all days. Check it out, let…

I have not done a Words Not Found in Scripture post in a while, so I decided to pull out a quick one for everyone. Today I would like to talk a little bit about the word “pastor”. In the modern Evangelical Christian Church the Pastor is basically the CEO. He runs the show, his…

Wade Burleson has written an excellent post concerning Tea Totalers within the SBC.Click here to read it – I highly recommend it. Enjoy,Lew

Turner Broadcasting System’s Adult Swim plays a rather crude, but often hilarious claymation called Moral Orel. Moral Orel is a creation of Dino Stamatopoulos. As described on their site, “Orel is an eleven-year-old boy who loves church. His unbridled enthusiasm for piousness and his misinterpretation of religious morals often lead to disastrous results, including self-mutilation…

Why do we wear ties on Sunday mornings?