This post is not intended to refute Evolution or promote Creationism. This post is merely an attempt to educate those of the flaws of thinking that Evolution is rooted in science — at least anymore so than any other theory of the origin of species. Before I started following Jesus Christ, I was agnostic… a skeptic. My skepticism led me to the hard-conclusion that the evolutionary theory was missing some important aspects before I could believe it to be absolutely true.

I guess I should define Evolution before continuing. In this post, when I talk about Evolution, I am talking about MacroEvolution. That is, monkey to man or goo to you, evolution. I am not talking about minor evolutionary changes within a species, such as a finch’s beak size or different breeds of dogs. I do not know of any true scientist, whether Creationist or Evolutionist, who denies minor evolutionary changes within a species. However, it is a leap in logic to go from Micro to MacroEvolution.

As I am sure you know, there are seven generally held tenets of the scientific method (wikipedia).

And then of course, an eight, if you’ll allow – Retest (frequently done by other scientists).

Some may say that they do in fact perform 4, 5, and 6. For instance, many scientists have studied fruit flies. Fruit flies breed and die very quickly, so their evolutionary changes should happen very quickly. The scientist try to induce evolutionary changes in a colony of fruit flies, collect the data, analyze it and draw conclusions from it. This is very sound and very scientific. However, this is not MacroEvolution (as defined above). To my knowledge, there has never been a successful evolutionary experiment that turned a fruit fly into a house fly (or anything else). The fruit flies that have been experimented on remained fruit flies their whole lives, their children were born as fruit flies, their children’s children were fruit flies. Furthermore, since MacroEvolution requires change by natural means, one cannot prove it in a lab… as that would fall into a category of man-made changes.

Unfortunately, the only information scientists have to support Evolution, is information gathered (we cannot even observe it happening). There is no way to experiment or test their conclusions.

Consider this popular painting of a monkey’s evolution to man: 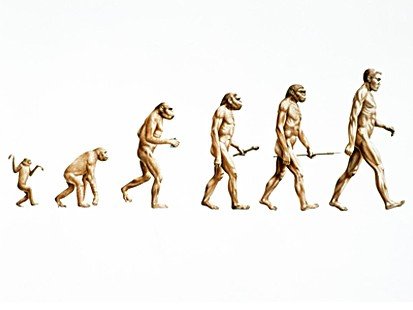 You may not know this, but this is a drawing, a simple interpretation of the information gathered. At best it should produce an emotional response that makes you say, “Hey, I think Evolution may actually exist, look over millions of years a monkey could have turned into a man.” But really, you should be thinking, “Someone with a certain bias and worldview drew his theory of how man came to be.” Maybe they’re right… but it’s probably a long shot. By the way, this drawing (and many like it) is usually an interpretation from bones and bone fragments. To my knowledge, skin/hair does not survive fossilization.

For the sake of argument, I could draw a picture of the history of the clock. From a sundial to a wrist watch. You would notice something, the all have a similar “look and feel” but they have changed drastically over thousands of years. But no one would suppose that this happened naturally. A very valid interpretation of the data is that we all came from the some primordial stew. But that isn’t any more valid than believing that someone or some thing created everything and that these creations have markings that are similar to one-another (like the history of a clock).

When it comes to Evolution, you actually are getting into what is called Historical Science. Historical science doesn’t actually operate on the same tenets of empirical science (i.e. the scientific method does not apply). In fact there is no real agreed upon method for interpreting historical data. Basically, it is the same as scientific method, minus steps 4, 5, and 6. Historical science can be found in the court room, when someone tries to explain what they believe happened during a crime. It is not observable (unless there was a video), it is not repeatable, and it is almost always subjective.

I don’t want to belabor my point. To put it simply, MacroEvolution does not (and cannot) follow the basic tenets of empirical science and therefore it is not science in the truest sense of the word. If you want to believe in Evolution, you are doing so based purely on the interpretation of collected data… the same data is interpreted by Creationist who have come to very different conclusions. These conclusions are largely based on our world view. If you do not believe in God, your interpretation of the data is unlikely to include a being a creator. Whether or not you believe in God will change drastically your interpretation of the data.

For what it is worth, I am a Creationist. I believe that the God of the Christian Scriptures created the heavens and the Earth. I think I will write something about the first animals and how they apply to Noah, DNA, and MicroEvolution.